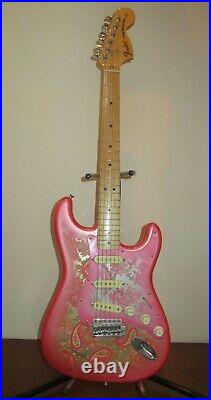 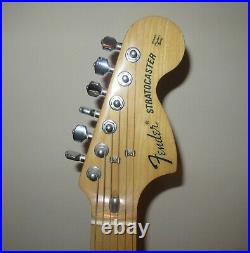 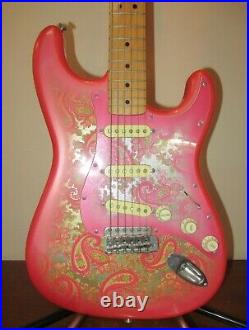 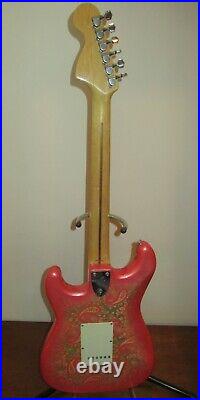 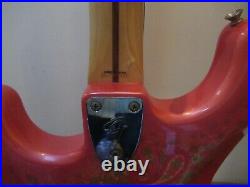 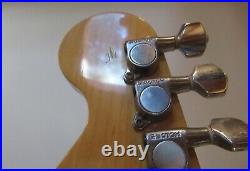 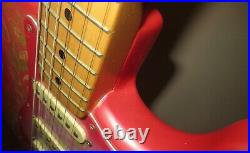 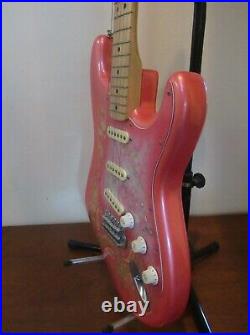 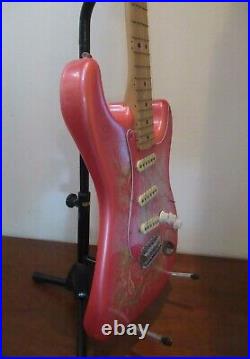 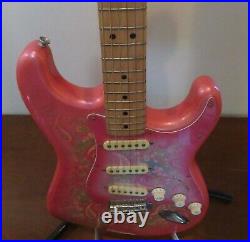 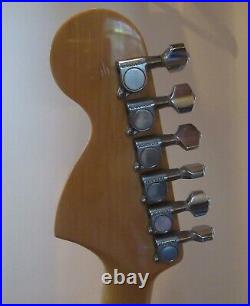 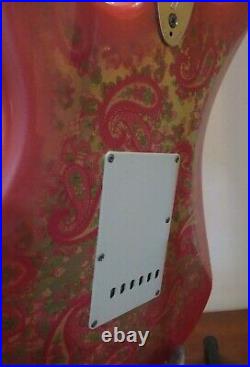 As you probably already know, the original Pink Paisley guitars from Fender were only Telecasters, and the Paisley Strat originated in the 1980s as a reissue, albeit of something that never existed in the first place. Having said that, this is an original mid-80s made-in-Japan model, not a newer poser guitar with artificial distressing or factory patina. No amount of "heavy relic" treatment can make a new guitar old.

This is more than 30 years old and sounds incredible. A lot of tone comes from choice of strings, amplifiers, pedals and, of course, technique, but this Strat has some mojo you won't believe. If I could compare it to anything, it would be Nile Rodgers' "Hitmaker" guitar that you have heard thousands of times on countless recordings. Whether you are playing rock, blues, country, fusion or funk, this instrument has you covered!

I don't know the complete history of this guitar, but I have owned it since 1991. The serial number is E819869, but since it is from Japan, the serial number formatting doesn't mean quite the same thing as it does for an American Strat. The only conclusion to be drawn from it is that it was made in the Fuji Gen Gakki factory, sometime between 1984 and 1987. It has a maple fingerboard with 21 frets and black position markers. While some players may prefer 22 frets, this design actually looks a lot better and if you need a high D, just bend your way up to it!

It also has Gotoh tuners and two string retainers on the headstock. The wide headstock makes it look like a CBS-era model from the late 60s or early 70s. This guitar has the 3-bolt Micro-Tilt neck. It is a surprising feature, since the design was discontinued on US Strats in the mid 70s and this guitar was made sometime later.

You wouldn't find this feature on other Strats from the same era. Micro-Tilt is available again on certain models, though, due to its superior adjustability and fine-tuning of action in the hands of a competent luthier. There are two cosmetic blemishes. First, there are some depressions near the top of the back side of the headstock, near the high "E" machine head.

I'm not sure what caused them, since they have been there as long as I have owned it. Second, there is a paint chip where the lower horn meets the neck joint.

Other than that, it's quite perfect with a glossy finish and a nicely aged neck and fingerboard. This is the real deal and it will likely become your favorite guitar immediately. The item "Fender SSS Stratocaster Pink Paisley Strat MIJ 80s Excellent Profound Mojo" is in sale since Friday, September 13, 2019.

This item is in the category "Musical Instruments & Gear\Guitars & Basses\Electric Guitars". The seller is "funky5ivestring" and is located in Corning, New York. This item can be shipped to United States.