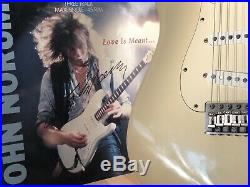 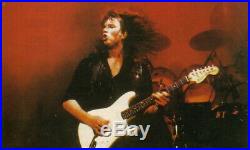 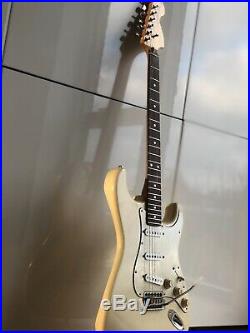 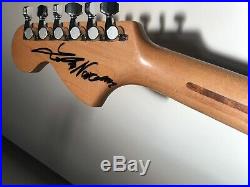 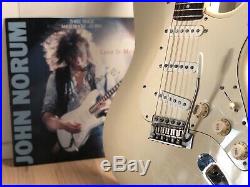 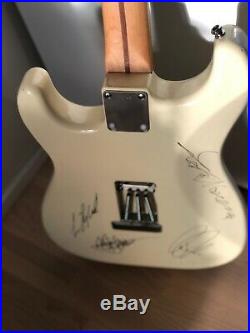 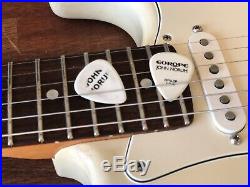 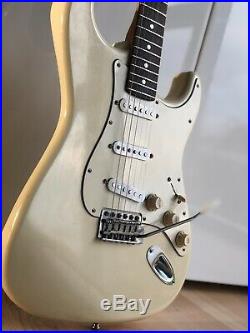 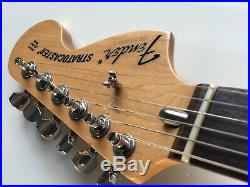 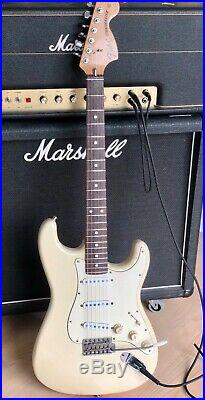 JOHN NORUM's Original Fender Stratocaster from THE FINAL COUNTDOWN days, video and tour. Yes, this is the ONE AND ONLY Strat that John Norum used worldwide in 1986 when Europe released The Final Countdown and toured all over the world. Checkout the video for the title track The Final Countdown, or go on YouTube to search for "Europe live in Sweden 1986" where you can see the guitar in action. According to Norum he also used it a lot when he was in Dokken!

It comes in a newer hardcase, with 2 of Norum's Picks, and a signed EP (LP) of Norum's 1988 single "Love is meant to last forever". It's built in Japan, probably in 1985 as a 1972 reissue. It has seen some modifications by Norum over the years: I would estimate the radius to be around 12. The guitar now has 22 frets, checkout the video link where Norum explains how the fretboard was extended to give space to the extra fret.

The bridge is updated to a Callaham bridge and the pickups are DiMarzio's: FS-1, HS-3, FS-1. There's even an EMG afterburner boost system installed, which works as a push/pull on the bridge tone control button. On the back, the guitar headstock is signed by John Norum, and the body is signed by Europe members John Leven, Mic Michaeli, Ian Haugland and John Norum again. The guitar can be picked up in Copenhagen og Hamburg Airport if you prefer.

The item "Fender Stratocaster John Norum's Original from Europe (The Final Countdown) 1986" is in sale since Friday, February 7, 2020. This item is in the category "Musical Instruments\Guitars & Basses\Electric Guitars".

The seller is "michaeljessendk" and is located in Aarhus. This item can be shipped worldwide.