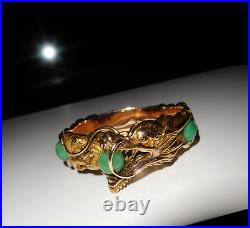 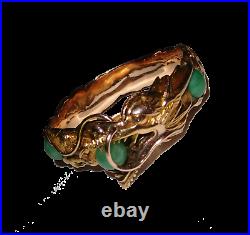 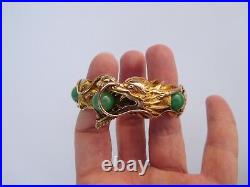 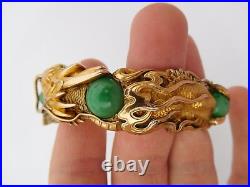 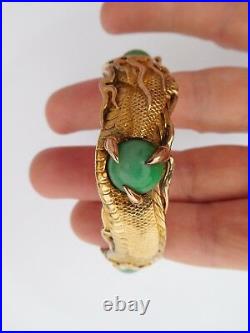 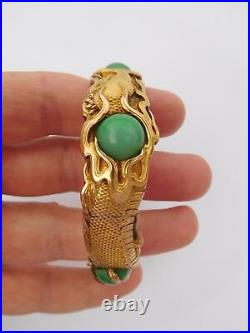 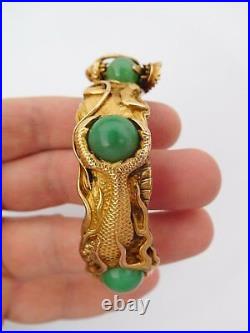 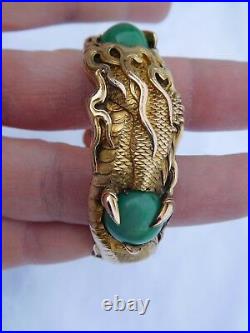 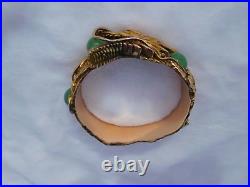 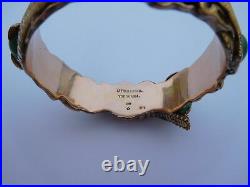 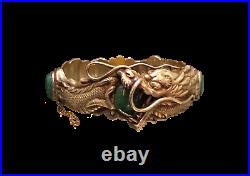 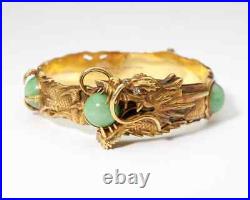 K18, followed by a five pointed star. Ironic that Arthur was making dragons!

I can't begin to tell you how many copies I have seen of this authentic original 18K gold Dragon bangle! The copies indicate how important this bangle was regarded in its day even by Arthur & Bond who attempted to remake the bangle with little luck.

There is even a copy made by Samurai Shokai, a master silversmith goldsmith in his own right! Which shows how impressed he was with this one of a kind masterpiece, for the details on this dragon bangle have never been matched! Its the original, for only a detailed masterpiece such as this would inspire So many attempts to copy it! But as good as the copies are they are very very far behind!

The 18K Quilong dragon bangle weighs approximately 61.8 grams. The spatial inner space is approximately 6 cm (2 6/16 inches) wide, and 5.6 cm (2 1/4 inches) high, so designed for a petite woman! Now it is noted that the. Empress Shken adopted the name Haruko due to her diminutive size, for the bracelet being composed of 18K gold of good weight has a very narrow selection of cliental in terms of wealth and prestige, plus dragons represented emperors and empress! Noted also that she used to love wearing bracelets.

Perhaps it was only created with her in mind but never delivered? The bracelet also encompasses four circular cabochon jades, and one spherical jade in the dragons mouth.

The bracelet is one side of a full dragon flying or swimming in a circle with the tail ending behind the dragons head. One also views three of the dragons legs with the right front leg extending its three talons ahead of the dragons open mouth which has its tung rolling around a jade sphere within the dragons sharp sharklike teeth (note the copies have obscure shaped teeth). The upper scales and the snakelike underbelly follow the dragons almost entire length! Stretched backwards with its three lifelike talons holding one of the circular jade cabochons, with flames protruding behind the head and afore jade cabochon. The body stretches to another flames encompassing a jade cabochon before the backward stretched left leg which grabs another cabochon jade from a different angle with beautiful curves and form (unlike the copies which fail at that again). The right whisker curves forward while the left whisker curves backwards, and on the right side above the forward stretched right hand one observes the above section of the begging tail so that the dragon is complete!

Empress Shken was followed the Shinto path in which dragons play a central role! Now I can not prove beyond a reasonable doubt that she owned such a bracelet, maybe she once did and passed it on as a royal gift, but this is only an assumption for otherwise the price would be much greater!

Perhaps you can unfold the secrets wishing this dragon? This bangle was the inspiration behind the Nosey Dragon Co. Egardless it is an extremely important jewel representing the Meiji era, the Chinese as well as the Japanese and dragons, in a time when Asia itself was spinning and curving like a dragon to define itself in what Asia is today! So if you would like to out-do the Liscum Bowl which is composed of merely silver then I.

Present to you a better, this one of kind golden dragon, a jewel fit for emperors and empresses! Feel free to check out my other Museum Quality Collection! Remember that gold and fire are associated with dragons, so did dragons create the smith or did the smith create the dragons, the none ending cycle which is represented here!

This item is in the category "Jewelry & Watches\Vintage & Antique Jewelry\Fine\Victorian, Edwardian 1837-1910\Bracelets". The seller is "bluefirebreather" and is located in San Bernardino, California. This item can be shipped worldwide.