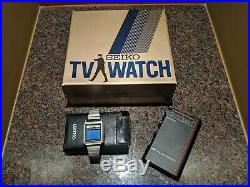 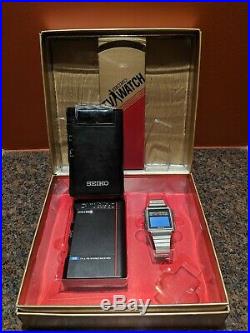 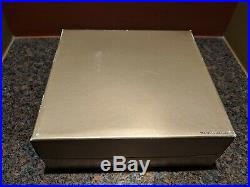 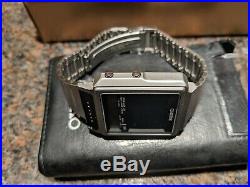 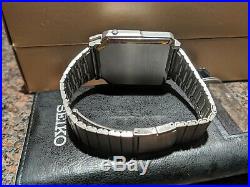 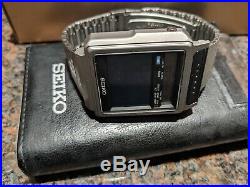 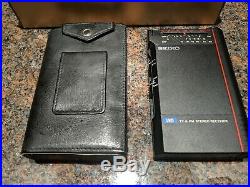 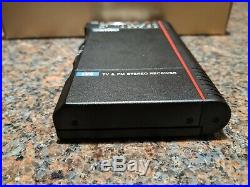 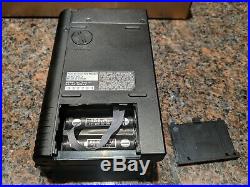 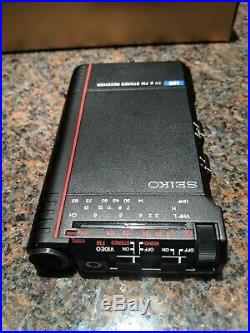 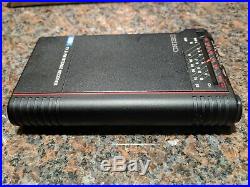 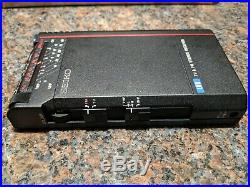 In it's original gold colored box. The box is pristine on the inside, the fancy red display area is intact with clean and crack-free upper and lower clear plastic inserts. The exterior sides and top of the box are also pristine. There is some minor wear to the corners and on the bottom of the box - see the pictures for complete details. The timepiece itself is nearly flawless. It has never been worn, it has sat on my dad's shelf since he bought it directly from a jeweler. This week I took it to a watchmaker to have the battery replaced.

It is now running and keeping accurate time as shown in pictures 1 and 2. It includes the Seiko tuner unit TR2-01 which is also in incredibly clean and in unused condition along with it's matching leather carrying case. The battery compartment is corrosion free and includes the original battery release fabric strap. The tuner unit powers on, but all I heard were some clicking noises when trying to listen to FM radio. From my research, the Seiko original headphones had an antenna embedded in the wiring and would possibly allow better reception than what I experienced with a generic set of headphones.

Please note it is missing the manual (which is available to download online), the original headphones, and most importantly, the video connector cable -- so yes, there is no way to display a TV image on it, but with the current broadcast standard being digital, there really isn't a practical way to watch television on it even with the video connector cable. Some Youtube videos show people "modding" it to accept a signal from a device other than the included tuner box. I personally wouldn't modify this gem of a collectible, but to each their own.

It will be professionally packed into a larger sturdy box with ample cushioning to insure your Seiko TV Watch arrives in the very same awesome condition that I've described in this listing. The 1982 Seiko TV Watch is a wristwatch with a built-in TV screen. It no longer works, because analog TV broadcasts stopped in the US in June 2009. The watch was so cool that it was featured in the 1982 James Bond Film Octopussy.

For a recursive experience you can watch a YouTube video of Octopussy on the watch. The Guinness Book of Records showed, in its 1984 edition, the SEIKO TV-Watch as the "smallest TV set in the world". This is an interesting theory, since from what you can see here actually looks like the smallest TV by far. Unfortunately a vital detail is missing; the necessary TV receiver is inside a box model no. TR02-01 approximately the size of a Walkman.

The box is connected to the watch via the cable shown on the photograph. The idea was to put the cable through the sleeve of your jacket and hide the receiver in the pocket. Then just put on the earphone (the cable also serves as an antenna) and you can watch TV inconspicuously almost anywhere. Details were hard to recognize because of the slow and low contrast liquid crystal display. The TV-Watch by HATTORI SEIKO CO. LTD (founded way back in 1881) was presented in Tokyo during the summer of 1982 (16th of July or 23rd of September, according to different sources).

Some hundred million yen were invested in its development. In the beginning, the TV-Watch was only available in Tokyo and Osaka as DXA001 for 108,000 Yen, later also as DXA002 all over Japan for 98,000 Yen (at that time about 500 and 600 Euro, respectively).

Both versions are said to differ only by the case design (the first edition DXA001 had a black outline) and the headphone, the less costly package being only equipped with an earphone. The protective pouch for the receiver also came in a silver color. Strangely, the obviously highly pessimistic developers expected the LCD module to last only about seven years. Regardless of its "factual impracticality" the SEIKO TV-Watch is the holy grail of every pocket TV collection.

The TV-Watch was seen on the big screen several times. In 1983, Roger Moore wore a TV-Watch in Octopussy instead of the usual Rolex Submariner. In 1987, you could see one on Tom Hanks' wrist in the comedy Dragnet. Naturally in both movies it came without the earphone (or antenna respectively) and in Octopussy it even had a color screen. Partly because it was seen in a Bond movie, the prices for the TV-Watch rocketed.

Technical details: 1.2" display w/o background lighting ("blue/white, 31,920 pixels, 10 shades of grey, 16.8 25.2mm), 5 hours running time on one set of batteries, external tuner for VHF & UHF channels 2 to 83! And FM stereo radio reception. The watch in its original function can be "misused" as a stop watch (resolution 1/100 seconds) and as an alarm-clock. The flexible 6-conductor cable supplies three different voltages (4, 9 and 13 Volt) with separate signals for video and synchronization.

The only optional accessory was the AC adapter TD02. The item "Seiko TV Television Watch James Bond Octopussy In Original Box Amazing Condition" is in sale since Wednesday, September 25, 2019. This item is in the category "Jewelry & Watches\Watches, Parts & Accessories\Wristwatches".

The seller is "member43668717" and is located in Skokie, Illinois. This item can be shipped to United States.