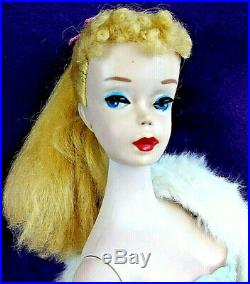 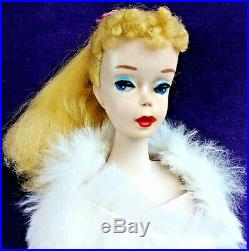 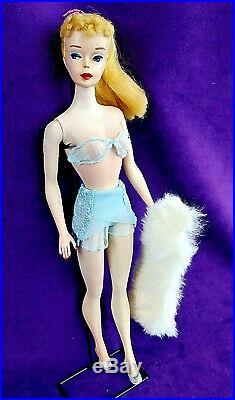 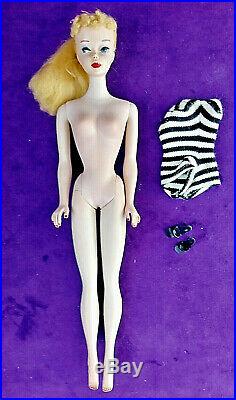 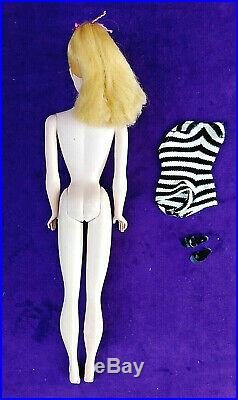 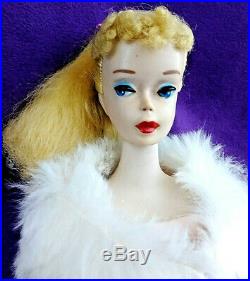 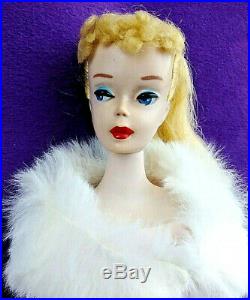 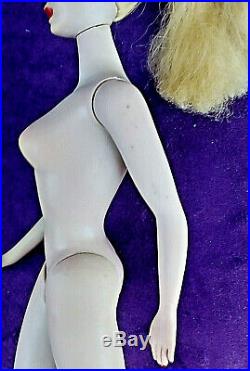 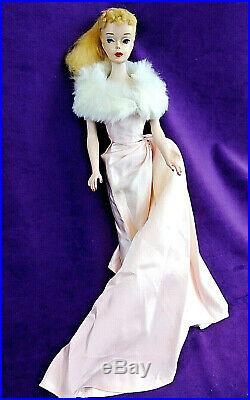 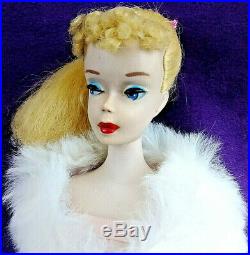 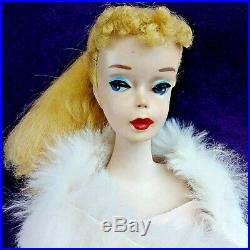 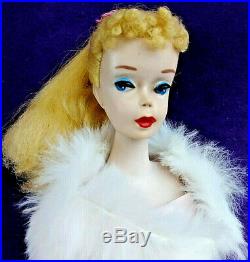 Here's a hard to find beauty, a Blonde #3 ponytail Barbie from 1960. She is quite the vamp, and has the rare blue eyeliner (most #3 dolls have the brown eyeliner). I think she's one of the prettiest #3's that I have come across.

Her face and body have a pale peachy skin tone that's really pretty (though her torso has retained a slightly pinker color). This doll was obviously someone's treasured doll, and she has few play wear issues.

I pictured her in the blue lingerie undergarments, to show off her pinker torso, I think it makes her look a little more human, and a little naughty! Barbie has the stylized make-up of the 50's with all original scarlet red lips.

Her brows had some rubbing, so they have been retouched, but everything else is all original, including some smokey eyeshadow. Barbie does have a tiny speck on the left side of her forehead (in the pic), but this only is visible really close or with a magnifier.

No neck tears, nose nips, or green ear stains. Barbie's light blonde hair is all there with no missing plugs or trims. Her soft mohair bangs still have lots of ringlet curls. Her ponytail is tied with some pink cord, (the original topknot has come undone), and she has lots of length and thickness in her ponytail.

With her pink coloring and soft blonde hair, she is just like cotton candy! Barbie's body has the early markings on the right side of her rear end: Barbie TM, Pats Pend, cMCMLVIII, by Mattel Inc.

Her left butt cheek says B18. She is pretty clean and stain-free, but there are a few stray specks here and there in the vinyl. There is a speck on her left middle back, and several tiny black specks on the side of her left upper arm. I've taken a close-up pic of this; they're not very big, but they are there. And there is a very faint "freckle" on the front middle of the left thigh (left in the pic); I'm being very picky in noting this, since it is faint. Barbie has all of her nail polish, and 1 leg is slightly shorter than the other, which isn't unusual in some of the older issue dolls. Please see my other auctions for more vintage Barbie dolls and Barbie clothing lots, and for a group of rare girls' licensed Barbie logo clothing from the mid-1960's. The item "Vintage 1960 #3 Blond Ponytail Barbie TM Rare Blue Eyeliner, Peachy Skin OSS BIN" is in sale since Friday, April 12, 2019. This item is in the category "Dolls & Bears\Dolls\Barbie Vintage (Pre-1973)\Vintage (Pre-1967)". The seller is "bartalk" and is located in Seattle, Washington. This item can be shipped to United States, Canada, United Kingdom, Denmark, Romania, Slovakia, Bulgaria, Czech republic, Finland, Hungary, Latvia, Lithuania, Malta, Estonia, Australia, Greece, Portugal, Cyprus, Slovenia, Japan, Sweden, South Korea, Belgium, France, Ireland, Netherlands, Poland, Spain, Italy, Germany, Austria, Mexico, New Zealand, Switzerland, Norway, Ukraine, Croatia, Luxembourg.