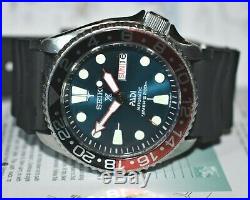 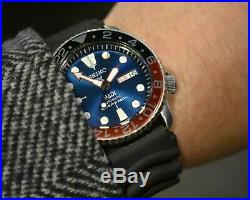 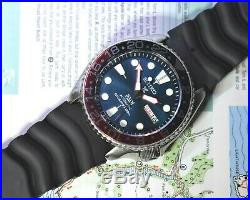 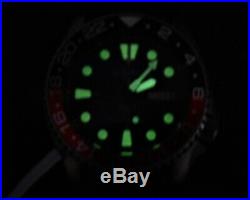 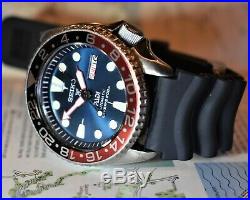 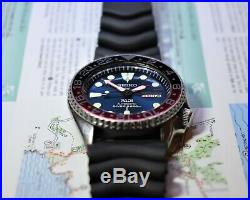 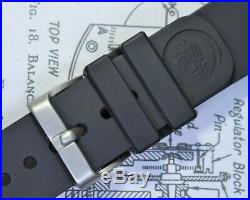 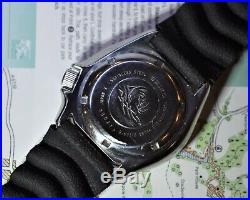 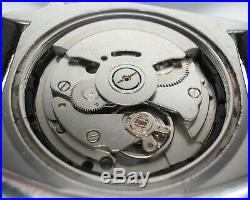 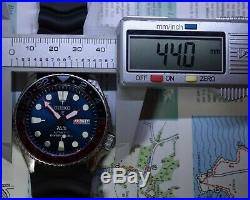 Case: Stainless steel, screw on back. Strap: Original Seiko'Z22' rubber. Wet suit compatible stretchy strap. To change the time and advance the day / date you must first release the crown by turning it anti clockwise.

The watch was serviced before coming into my possession but as I don't own a pressure chamber I cannot vouch for its water tightness! Please note that this watch is vintage and is not a modern quartz movement.

Therefore, +-2 mins per day is considered'good' in vintage watch terms. This represents 99.9% accuracy. You will get a watch that ticks, and the second hand'sweeps' in a way that a modern watch never can.

Please see my other listings for more watches. Comes in a box, which is not original and there are no original papers. Photo's form part of the description, please view them carefully. For dive watch enthusiasts Seiko dive watches.

Are amongst the most popular and sort after and have earned a cult following. Rather than so-called desk divers, which may look and work like a dive watch but have probably never been deeper than a. Seiko dive watches are constructed for actual scuba diving by adhering to the ISO 6425 standard. Not content at being Japans leading watch brand, Seiko clearly had a goal of becoming a dominant player on a global stage. And to do that, it had to surpass the Swiss, who were the leaders in the field.

The 1960s was an important era for Japans premier watch brand. This was the decade that Seiko launched the first Grand Seiko. (1960), which boasted a mechanical movement with the best accuracy and precision in the world. Taking full advantage of its Official Timekeeper role at the 1964 Tokyo Olympics, Seiko unveiled Japans first chronograph wristwatch (manual-wound) that very same year. In March 1969, Seiko introduced the worlds first automatic chronograph watch to the Japanese market. Later that year, in December, Seiko unleashed a technology that would just about topple the Swiss watch industry: the Seiko Quartz Astron. Which was the worlds first quartz wristwatch. But lets rewind a little to the 1950s/1960s, when there was already a race among top Swiss watchmakers like Blancpain, Rolex, Omega, and Breitling, to make the best diving watches. And Seiko wanted to throw its hat into the ring too.

So, in 1965one year after the Olympics and Japans first chronograph wristwatchSeiko released Japans first dive watch. It was the Seiko 150M Divers (62MAS-010), which had a 38 mm case water resistant to 150 meters (492 feet), a bidirectional rotating bezel to time dives, and an automatic movement that operated at a frequency of 18,000bph.

This pioneering move by Seiko laid the groundwork for the brands Professional collection, better known as Prospex (Professional Specifications). While a dive watch in mid-1960s Japan was very much a niche product, Seiko continued to develop their divers. Seiko notably placed the winding crown at the 4 oclock positiona signature design trait that carries on today. Shortly after the release of its high-beat Divers 300M watch in 1968, Seiko received a letter from a professional saturation diver that would change the course of the companys dive watches. The professional diver informed the company that at depths greater than 300 meters, Seiko diving watches simply did not hold up.

Either the crystals would pop off due to a build-up of helium gas during saturation dives or that the watches would break if they got knocked around. The Seiko management team took this correspondence very seriously and as a result, established a new R&D team, led by engineer Ikuo Tokunaga, charged to build a proper professional dive watch that could withstand the pressures of the very deep. While Ikuo Tokunagas team worked on making a professional saturation diver, Seiko continued to develop its range of Seiko 150M Divers. A particularly notable one is the automatic 6105-811X with an asymmetrical cushion-shaped case.

Seiko made this model from 1970 until 1976 and it was especially popular with US military servicemen during the Vietnam War due to the divers robustness and topnotch quality. In fact, the watch became globally famous after Martin Sheen wore it while playing Captain Willard in the movie Apocalypse Now, and it is now known as the Seiko Captain Willard in collecting circles. Seiko eventually replaced this model with 6306/6309 references, which had a redesigned cushion case. And because of their silhouettes, these cases ultimately became known as the Seiko Turtles. Seiko eventually stopped making turtle-style cases in the late 1980s, but to the delight of vintage Seiko enthusiasts, the company brought them back in 2016. Another important seventies Seiko release was the 1978 launch of the 150M Divers 7548, which gave us the case design used on the legendary SKX007generally accepted as the most affordable mechanical ISO-rated dive watch. Its important to note that the Seiko 150M Divers eventually became 200M Divers in the mid-1980s. Finally, in 1975, Seiko presented the Professional Divers 600M (6159-022); a groundbreaking diving watch packed with 20 patented innovations. Not only was it the worlds first titanium dive watch waterproof to 600 meters, but it was also highly luminescent, anti-magnetic, and shock-resistant.

Plus, it was also presented on the worlds first accordion style rubber strap t. O better accommodate contracting and expanding wrists and/or wetsuits.

The most distinctive part of the Seikos first Professional Divers 600M watch (affectionately nicknamed the Grandfather Tuna) however, is its case design. The one-piece case was fashioned from titanium, a material prized for its anti-corrosion properties and lightness.

The case was further shrouded with an outer case protector structure (cut in a way to still permit bezel turning) and the crystal was fitted into the case sealed with an L-shaped gasket. All of these thoughtful design details created a case that helium simply could not penetrate. Therefore, the Professional Divers 600M watch did not need a helium release valve found on other professional dive watches such as the Rolex Sea-Dweller and the Omega PloProf. This iconic case silhouette paved the way for the popularity of future Seiko Tuna Can. Again flaunting their innovation-focused culture, this was the worlds first saturation dive watch powered by a quartz movement. It is often referred to as the Golden Tuna thanks to its gold-toned accents. The item "Vintage Seiko Prospex SKX 7s26-0020 200m Divers Day/Date men's watch. 2003" is in sale since Saturday, December 7, 2019. This item is in the category "Jewellery & Watches\Watches, Parts & Accessories\Wristwatches". The seller is "bugbyte72" and is located in Sutton Coldfield. This item can be shipped worldwide.